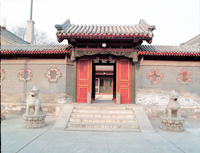 During the period from the broke out of Opium War in 1840 to establishment of People's Republic of China in 1949, Chinese architecture witnessed a blend in Chinese style and western style. Although the traditional Chinese architectural system still took the dominant role, buildings serving for entertainment industry, such as theaters, restaurants, and hotels, as well as the business buildings, such as department stores, food market and so on, all made breakthrough in the traditional architecture style and succeeded in building up business sites in a combination of Chinese and Western elements. Western architectures also appeared in China then. In some cities with leased territory, for example, Shanghai, Tianjin, Qingdao, and Harbin, some foreign buildings were erected, including consulates, foreign firms, banks, restaurants, and clubs. Some national architecture in modern times also appeared in this period, which is a combination of new functions, new technology and Chinese style.

After People's Republic of China was founded in 1949, Chinese architecture enters into a new era. The planed economic system helped to accelerate the development of architecture. The new Chinese style has experience the Returning to the Ancients' Period characterized by the partly application of big roof, New Communist Buildings Period represented by the Big Ten Buildings for National Celebration, and Cantonese Style Period integrated by the modern design and national spirit. Since the 1980s, the Chinese architecture gradually became open, compatible and multiple.