Peking Opera of China is a national treasure with a history of 200 years. In the 55th year of the reign of Emperor Qianlong of the Qing Dynasty (1790) , the four big Huiban opera Troupes entered the capital and combined with Kunqu opera, Yiyang opera, Hanju opera and Luantan in Beijing's theoretical circle of the time. Over a period of more than half a century of combination and integration of various kinds of opera there evolved the present Peking opera. Peking Opera is the most significant of all operas in China, and it has a richness of repertoire, great number of artists and audiences, that give it a profound influence in China and plays a large role in Chinese culture. 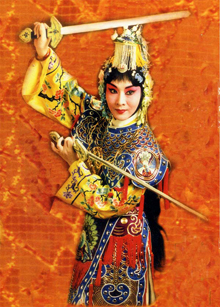 Peking opera is a synthesis of stylized action, singing, dialogue and mime, acrobatic fighting and dancing to represent a story or depict different characters and their feelings of gladness, anger, sorrow, happiness, surprise, fear and sadness. In Peking opera there are four main types of roles: sheng (male) dan (young female), jing (painted face,male), and chou (clown, male or female). The characters may be loyal or treacherous, beautiful or ugly, good or bad, their images being vividly manifested.

The music of Peking opera is that of the "plate and cavity style".Its melody with harmonious rhythms is graceful and pleasing to the ears. The melody may be classified into two groups: "Xipi" and "erhong", guiding pattern, original pattern, slow pattern, quick pattern, desultory pattern being their chief patterns. The performance is accompanied by a tune played on wind instruments, percussion instruments and stringed instruments, the chief musical instruments being jinghu (a two-stringed bowed instrument with a high register), yueqin (a four-stringed plucked instrument with a full-moon-shaped sound box), Sanxian (a three-stringed plucked instrument), Suona horn, flute drum, big-gong, cymbals, small-gong, etc.

The costumes in Peking opera are graceful, magnificent, elegant and brilliant, and mostly are made in handicraft embroidery. As the traditional Chinese pattern are adopted, the costumes are of a high aesthetic value.

The types of facial make-ups in Peking opera are rich and various, depicting different characters and remarkable images, therefore they are highly appreciated. Moreover there are numerous fixed editions of facial make-up.

Since Mei Lanfang, the grand master of Peking opera, visited Japan in 1919, Peking opera has become more and more popular with people all over the world, and it has made an excellent contribution to cultural exchange between China and the West, to friendly association and to improvement of solidarity.

Peking Opera house of Beijing has been invited to perform in U.S.A., England, France, Germany, Italy (three times), Australia, Japan (four times), Brazil, Turkey, Singapore, South Korea and Hong Kong (five times). The performances have made an outstanding contribution to Sino-foreign cultural exchange and to the promotion of friendly association of peoples in the world, and were highly appreciated by foreign audiences.

In 1993 Peking Opera House of Beijing as a big Peking opera troupe made a performance visit to Taiwan, pushing the cultural exchange to a new height.