Those who are fortunate enough to spend time travelling around China will discover that styles of cuisine in the north and south of China are different. In the south, rice is much more popular as the main staple of the Chinese diet, while in the north, wheat products such as noodles, flat breads, dumplings and steamed buns are as popular or more popular than rice as the staple. As China's economy develops and more people move around, this trend may change, but it is a good rule of thumb to understand Chinese cuisine.

Peking Roast Duck has the reputation of being the most delicious food Beijing has to offer. Eating Peking Duck is seen to be one of the two things you are absolutely supposed to do while in Beijing. The other one is climbing the Great Wall.

The place that offers the best Peking Duck is the Quan Ju De Restaurant, which has outlets at Qianmen, Hepingmen and Wangfujing. It was established 130 years ago.

At Quan Ju De, ducks are immersed in condinments unique to the restaurant and are roasted directly over flames stoked by fruittree wood. The best roasted duck is date-red, shining with oil, but with a crisp skin and tender meat. The chef cuts the meat into thin slices at table. Then the meat is served with Chinese onions and special sauce.

Another famous restaurant offering Peking duck is the Bian Yi Fan, which opened in 1855, nine years earlier than Quan Ju De. At Bian Yi Fang, roasting is done in an enclosed container fueled with crop stalks.

Imperial Court Food is a style of Chinese food that has its origins in the ImperialPalace. It is based on the foods that were served to Emperors and the court. Fang Shan in BeihaiPark and Ting Li Guan in the SummerPalace are the best ones. 150 years ago, you would never have been able to eat this stuff, so give it a shot. It is a little expensive, however. 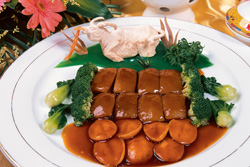 The most famous type of official food is Tan Family Food, which can be had in the Beijing Hotel. This is the preferred food of the Qing Dynasty official Tan Zonging, and was later introduced into restaurants.

Another type of food is that which is describe in the classic novel "Dream of Red Mansions". The author, Cao Xueqin, describe a number of dishes in the book and now there are several restaurants which serve this style of dish. The most famous place is the Beijing Grand View Garden Hotel. This hotel is right next of the Beijing's Grand View Garden which is modeled after the garden described in the "Dream of Red Mansions". 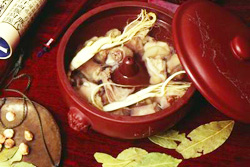 There are hundreds of dishes that are medicated with such choice tonic materials as ginseng, deer musk, bear's paw, Chinese wolf berry and soft-shelled turtle, the cream of the crop of Chinese medicine. The "Yang Sheng Zhai" Restaurant of Xiyuan Hotel has the best reputation among such food. Although it has been changed to Sichuan Restaurant, it still offers medicinal foods. 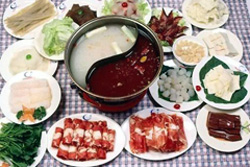 Beijing winters can get very cold, so hot pot is a natural favorite with local people. In recent years, Cantonese and Sichuan flavor hot pots have have grown in popularity, overtaking the more typical Beijing tradition of boiling thin slices of mutton in a seasoned broth (otherwise known as Mongolian hot pot). The basic ingredients of a hot pot meal include thinly sliced beef and mutton with fresh vegetables.

In some styles, various types of sea food are added. Cantonese style hot pot has a relatively mild flavor in the broth used to boil the ingredients and in the condiments in which the meat and vegetables are dipped after having been cooked thoroughly. On the other hand, the Sichuan style hot pot is known for its wickedly hot, spicy flavor that may leave you with a slightly numb feeling on your tongue.

Another hot pot trend is that many places now offer "self-service" hot pot where you can select your own hot pot ingredients, broth seasonings and condiments in an "all you can eat" setting. Try Donglaishun Restaurant for traditional Beijing "Mongolian hot pot". 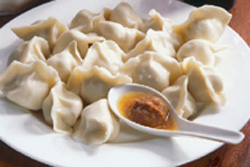 Jiaozi or dumpling is a traditional and popular food with a long history in China. There is a popular saying in China: "There is nothing more delicious than Jiaozi." so you could imagine how much Chinese love it.

In the later years of Eastern Han Period, an official called Zhang Zhongjing created a kind of food to help poor people keep warm in cold winter. It was made with all kinds of fillings such as mutton, hot pepper and some medicinal materials. Afterwards people began to make dumplings as well.

Jiaozi is the food that will no doubt appear on tables during Spring Festivals. Generally, people prepare it before midnight on the last day of the passing lunar year and eat it after the New Year's bell is sounded.

Jiaozi looks like shoe-shaped gold and silver ingots so when people eat it during festivals they really hope it could bring fortune and good luck to them, and this, of course, is their best wishes. Sometimes people will add some sweets, Chinese dates and chestnuts in fillings of some dumplings to express their wishes. They hope those who get sweets could have a sweeter life. Those who get dates and chestnuts could have babies early, because dates (Zao), are homonymic with early in Chinese, so are chestnuts (Zhenzi). Zi is homonymic with children. 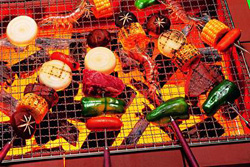 Along with Roast Duck and Hot Pot, Barbecue is another most famous food in Beijing, which can be traced to ancient nomad in northern China. Meat, usually veal or mutton, is cut into thin slices and then soaked into a mixture of soy sauce, a kind of special wine, ginger liquor, white sugar and some other seasonings. After that you put the meat onto a grill and turn it over for several times till it gets cooked with long chopsticks. The next thing to do is to serve it together with pancakes, sweet garlic and cucumber. 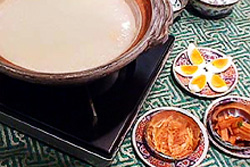 To make La Ba Zhou, you need many nutritious ingredients besides rice, such as glutinous rice, millets, peanuts, chestnuts, Chinese dates, lotus seeds and red-beans. The ingredients of La Ba Zhou vary in different places but there is one thing for sure: everyone wants it to be a little sweet.

There are several stories why people have this porridge on this particular day. The most popular one goes like this: It came from India. It was said that Sakyamuni once fell down in a faint when he was traveling around India. A shepherdess saved him and fed him with her meal which was a kind of porridge made of rice, glutinous rice and fruit picked in mountains. Sakyamuni recovered soon and attained his Buddha hood on the 8th day of the 12th lunar month. Since then his followers began to make this porridge to commemorate this shepherdess. As Buddhism spread more widely, La Ba Zhou became civilian.

The history of La Ba Zhou in China could be traced back to over one thousand yeas ago. During the Qing Dynasty (1644-1911) the Emperor granted it to his officials and each monastery on that very day. Common people made it as sacrifices to their ancestors. They also entertain their friends and guests with it. This has been preserved till today in many parts of China.