Folk customs reflect the life of the people -- their habits and customs, ideologies and beliefs, social activities and the like. Traditionally, folk customs and folk arts have been congenial twins. since the New Stone Age, folk arts have taken shape and prospered in all societies and all areas.

Moreover, the longer the history of a nation or people, the richer its folk customs and the deeper their roots. The development of folk arts and the spread of national heritage go hand in hand.

Among the various categories of ancient works of art that give expression to Chinese folk customs and habits, folk prints are the most distinguished because of their great popularity among the people, both rural and urban, and their lasting artistic appeal. 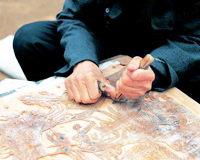 Most ancient Chinese were polytheists. Aside from Buddhism, introduced from india, and native Taoism, the common people worshiped and created many other gods, immortals and ghosts. Their cult activities, of course, may be more appropriately described as social customs than as religion. A look at the extant statues in Buddhist and Taoist temples and the printed images in Buddhist and Taoist scriptures shows that both the Buddhas (for example, those in the Three Worlds --- Bhaisajya-guru of the Privy in a Monastery, Sakyamuni of Saba and Amitabha Buddha of the West Paradise) and the Taoist gods in the Three Clear Heavens (i.e., Revered Yuanshi of Yuqing, Revered Lingbao of Shangqing and Revered Daode of Taiqing) are similar in appearance -sitting in meditation with legs crossed. Yet, the images of the popular deities created by the common people are quite different from these. To fulfill their desires and hopes for a good fortune, a bumper harvest, a chubby boy, an official promotion, a peaceful and healthy family, the Chinese people and the rural population in particular created various deities to suit their liking. They believed there were numerous gods in the worshiped with equal sincerity Buddha and Li Er, founder of Taoism.

Almost everything usable in the Three Realms was administered by the relevant gods, immortals or ghosts. For instance, the coalpit was ruled by a deified mouse; the paper making industry was supervised by the God Cai Lun(?-121), a great inventor of the Eastern Han Dynasty (25-220), who developed a new way to make paper; the human life-span according to some ancient fairy tales was said to be determined by shou xing (Star of Longevity) , a venerable old man identified by his conspicuously projected forehead, long and silvery white eyebrows and beard and walking stick; Zhao Gongming and Ran Dengdao, novel characters said to be of the late Shang Dynasty (11 B.C. ), were worshiped as the gods of wealth and door gods. Everything from deified historical figures to animals were believed to be in charge of human affairs.

Depictions of these deities by anonymous artists and artisans in ancient China appear in the folk prints, a unique and popular art form, which has survived all perils and remained as a jewel in the treasure house of traditional Chinese culture and art.