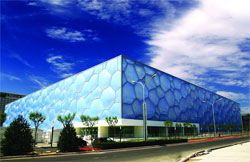 The Beijing National Aquatics Center, known as the Water Cube, is an aquatics center that was built alongside the Beijing National Stadium for the 2008 Summer Olympics. It maybe known as the cube, but the building is shaped like a rectangle. During the 2008 Olympics, a staggering and impressive 25 world records were made in the complex. The park has gone through quite a few changes to attract visitors to the Olympic site, and make it the attraction that it is today. In August 2010, the 20,000 sq ft Water Cube reopened as an exciting destination for those who love water. It is thought to be Asia’s largest water park and features a wave pool, lazy river, spa, water slides and various rides.

The design of the Water Cube was chosen by the Chinese people and really is an aspiring and unique creation, a mixture of the super modern and traditional design. The square shape is a reflection of the Chinese symbol for Earth and the circular shape of the National Stadium is meant to represent Heaven. 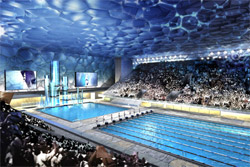 The Aquatics Center looks like it is covered in thousands of soap bubbles, which give a 21st century feel to the building. The structure is clad with a tough recyclable material that weighs much less than a piece of glass of equal size, and the bubble cladding cleans itself in the rain, so no need for window cleaners, the rain does the job for them.

The Water Cube comes with a greenhouse type effect, allowing high levels of daylight into the building, to assist with heating the swimming pools and building, thereby reducing energy consumption by a commendable 30 percent. So not only does the building look impressive, but it was designed with the environment in mind, a definite all round winner.

The Water Cube was not designed to permanently host of swimming competitions. From conception, its real intended purpose was to be a water park. With the opening of the Happy Magic Watercube, the Water Cube records as the world’s largest indoor water park.

The Happy Magic Watercube boasts more than 50 water slides and 18 water rides and enough space for 30,000 swimmers. Happily, the place has much more than mere size going for it.

Operated at ten minute periods throughout the day, the wave device gives you the feel of being out in the open seas, filling the air with laughter and children screaming with excitement. It is a well-liked area, where people tend to meet family and friends and relax for a few moments, until the wave machine begins again making the air feel electric with excitement.

A ride for thrill seekers, take the tornado from the tallest tower in a car, that can hold up to four allowing time, to enjoy the excitement of lunging down the waterslide together. Speed builds up with a 90 degree turn before flying into a rapid twist at 180 degree, the car sprints down a colossal stomach churning plummet, and enters a funnel taking you up the parallel wall, and falling back down rocking before exiting in the pool below.

Two riders take the bulletbowl together in a seated twofold tube, racing down the drop at swift velocity, before entering the bowl at the end, and struck with loads of spray that creates a corkscrew finish into the Lazy River.

With a 40 foot free fall ahead, you can hear the sounds and feeling of excitement engulfing you, as you climb the steps and enter the music filled and illuminated capsule. The anticipation builds swiftly as riders place their arms across their chests, and wait the three, two, one countdown and are thrown over the drop with maximum force. The aqualoop isn’t for the faint hearted and is fantastic fun.

As you’d assume the serpentine is lofty, precipitous and you’ll head down it very fast, experiencing the most adrenaline thrusting experience at the Water Cube. If you’re feeling apprehensive at the sheer height of the slide, watch for a while and see that it is perfectly safe and join the queue life is to short for regrets.

As well as the changing rooms and lockers that you would expect, there is an area for food and drinks, and just next to it an area for a little bit of retail shopping, offering you the opportunity to while away many hours here at the Water Cube.

The National Aquatics Center comes highly advocated to thrill seekers or those with an interest in modern Asian architecture. No doubt the oar inspiring Olympic Park in Beijing and the envy of other nations will undoubtedly take your breath away.

Transport: Take Subway Line 10 to Beitucheng and switch to Line 8 and get off at the Olympic Sports Center Station. Take the B1 or B2 exit.