Beijing roast duck is a well-known dish in Beijing with a worldwide reputation. A visit to Beijing is not complete without trying Beijing duck. 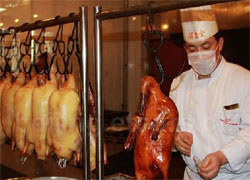 This tasty cuisine has been passed down for generations. High quality stuffed duck is the raw material, hung in an oven, and roasted over fire burning fruit tree wood. Roasted duck looks bright and dark red with a crispy skin, and is traditionally cut into a hundred and eight slices before serving to customers. The meat tastes fleshy and fat but not greasy.

Beijing roast duck is divided into two main genres by the way it is cooked. One is hanging roasted duck, and the other is braised roasted duck with a closed oven. The two popular roast duck restaurants in Beijing - Quanjuede and Bianyifang are the most representatives of these two genres.

It is said that Beijing duck is a rare delicacy, and is considered to be the highest quality duck meat in the world. Breeding this purebred white duck can be traced back a thousand years. People fed the duck in much the same way as geese in European countries. In the reign of Jiajing (1521–1566), Beijing roast duck was passed down from the imperial kitchen to become an ordinary Chinese dish. 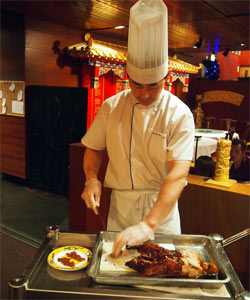 The first roast duck restaurant in Beijing, Bianyifang Restaurant, was opened to the public near Mishi Hutong in 1855. While the name of the duck was Jinling duck, the chef used a closed oven and straw as the fuel. This method ensured that the heat did not burn the duck. Before being put into the oven, a duck was prepared by stuffing with spice and a marinating sauce, which was soaked into the meat and added its own smell. It also helped the duck boil inside at the same time as roasting outside.

In 1864, the most famous restaurant in Beijing, Quanjude Roast Duck Restaurant, opened to the public. It improved roast duck technology, and brought in the hanging roast duck era. A small hole was opened in the duck to clean out the internal organs, then it was filled with boiling water, sewed up, and hung over a fire. This method prevents the loss of moisture and the duck's skin becomes very thin and brittle — the most tasty part of the duck. Hanging roast duck soon became widely accepted by local people.

Beijing duck is normally served cut into slices, each with duck skin and meat. The brittle skin can be dipped in a sauce. Alternatively a bit of sweet soybean paste can be spread on a thin Chinese pancake, followed by a few slices of roast duck, a few slices of onions, cucumber, or radish, and finally the pancake is rolled up for eating. 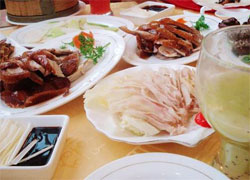 Quanjude is the most well-known by Chinese and overseas tourists. It uses a traditional method to roast ducks. Despite the high demand today, all the roast duck is still cooked by hand, not by machine, as hand-made products are more valuable and authentic than the machine-made products. The authentic taste has been passed down for generations. In Beijing, there are ten Quanjude chain restaurants open in the main districts. They are always fully-booked for the lunch and dinner. Book before you go.

Bianyifang mainly serves stewed roast duck. It is popular because it maintains the duck’s nutrition through stewing. The process of roasting a duck maintains the duck's mineral elements, such as potassium, calcium, manganese, iron, copper, and other trace elements in significantly higher amounts than ordinary roast duck. Duck breast fat and calories are significantly lower, and there is higher carbohydrate content. The protein contention of the duck is unaffected. It is altogether a healthier option, reducing the health problems associated with excessive intake of fat. There are 21 Bianyifang restaurants open in the main districts of Beijing. The average cost is 100 yuan per person. 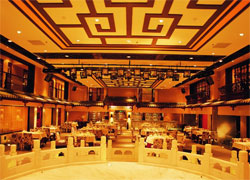 Dadong Roast Duck Restaurant is focused on the high end market. It has a high reputation among foreign tourists and is recommended by many tourist guide books. The restaurant not only serves exquisite roast duck, but also provides outstanding service. It is decorated in ancient Chinese imperial palace style. The walls imitate the palaces of the Ming and Qing dynasties, as does the traditional window lattice-work, and bright yellow table cloths.