Beijing, also known as Peking, is the capital and the second largest city of China. The total area of Beijing is approximately 16,800 sq km, and it has over 7.23 million people, 3 million of whom are temporary residents. These temporary residents are typically business people, teachers and students. Beijing's permanent residents are representative of all the different ethnic groups found in China, with the Han's comprising over 96% of the population. Mandarin Chinese is the language spoken in Beijing, with Beijing's dialect being the standard form of Mandarin. 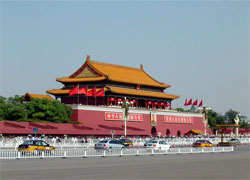 Beijing has four defined seasons. Summer and winter are the two longest seasons, while fall and spring are the shortest. The climate varies according to the season, with autumn being the most pleasant time to visit. Autumn is usually clear with cool temperatures, while winter is dry and, at times, bitterly cold, with temperatures dropping below 5 degrees F (-15 C).Spring is usually dry but very windy ( it is a good idea to protect your eyes to keep out blowing debris), while the summer is rainy and hot, with temperatures at times soaring above 100 degrees F (38 C). Brief introduction to the four seasons in Beijing will help you have a better understanding about the climate and practical tips for traveling in different time of the year.