Quanjude is the most famous time-honored brand restaurant for Peking Roast Duck in China. Quanjude enjoys a high reputation for its special roasting technique and its longstanding culinary heritage.

It was established in 1864 (the third year of Emperor Tongzhi of the Qing Dynasty), and has been greatly enriched throughout the years. Its creator was Yang Quanren, who started out selling raw chickens and ducks in the old Qianmen area.

Having chosen to specialize in roast duck, Yang intended to open his own shop. He bought the Dejuquan shop after its bankruptcy and changed its name to Quanjude, which symbolizes perfection, union, benevolence, and virtue under the proposal of a Feng Shui master.

Yang paid a chef, Mr. Sun, who specialized in an imperial recipe of furnace roasting duck for the palace. From then on, Quanjude began to serve roast duck from the imperial kitchen to the common masses, and word spread of its crispy but tender flavor. 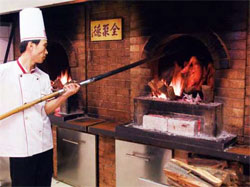 Distinct from the method of Bianyifang, where ducks are roasted with radiant heat in a closed oven, Quanjude hangs ducks from a hook in the ceiling of the oven and roasts them over burning non-smoky hardwood fuel, such as Chinese date, peach, or pear, to add a subtle fruity flavor and a golden crispiness to the skin.

Besides the peculiar roasting technique, Quanjude has a well-established integrated process from raw duck selection, to feeding, to slaughtering, and it ensures the fat but not greasy, crispy but tender, taste of Quanjude roast duck. 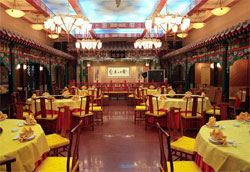 After over a hundred year’s development, Quanjude has expanded the restaurant in old Qianmen area to Quanjude Group, and has many branches in China.

The old Qianmen Quanjude Roast Duck Restaurant can be found in Qianmen Shopping Street. Despite renovation it retains its ancient style. The largest and the most splendid branch is Hepingmen Quanjude Restaurant, which can accommodate about 1,500 guests.

The newest franchised Quanjude restaurant outside China recently opened in Melbourne, Australia, and it making it convenient for Australians to have a try of the time-honored flavor.