There are some useful information listed below so that you know more about Beijing.

Beijing Municipality is located between 116°20′ east longitude and 39°56′ north latitude, with Tianjin City on its eastern border and Hebei Province on the other three sides. 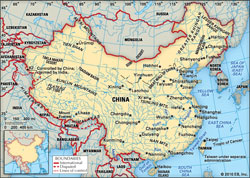 Lying in the northern part of North China Plain, Beijing is surrounded by mountains on the west, the north and the northeast.The northeastern part of the city is high while the southwestern part is low topographically, with a southeastern plain tilted gradually downward to the Bohai Sea. Major rivers flowing through Beijing include the Yongding River, Chaobai River, North Canal and Juma River that mostly originate in the northeastern mountainous areas of Beijing. These rivers flow through rugged mountains towards southeastern plain of Beijing and end in the Bohai Sea.

By the end of 2002, Beijing had a total of 14.23 million residents among of which 11.363 million people are registered permanent residents. The population density of Beijing is 847 people per square kilometer.

According to the Fifth Census conducted in year 2000, average life expectancy of Beijing residents reached 76.7 years. Beijing boasts all 56 ethnic nationalities of the country, with nationality of Hui, Manchu, Mongolia and Korea exceeding 10,000 people.

Second not only in size to Shanghai, and as an industrial center as well, Beijing has expanded its industrial growth to the rural areas in remote towns.Construction has boomed with new buildings, including housing, going up everywhere. In the early 90s over 2 million Chinese in Beijing were employed in the industrial sector, a little under 700,000 were in construction.

In recent years, Beijing has exploded in the retail sector with tremendous shopping opportunities that include international brands. Joint ventures with foreign companies are common, with many Western restaurant chains represented. An American in Beijing will almost feel at home with all the American restaurants available ranging from McDonald's and Subway to TGI Friday's.

The Sixth Session of the Eighth Municipal People's Congress voted the China Rose and Chrysanthemum as the official flowers of Beijing while the Chinese Scholar Tree and the Cypress became the official city trees. The plants selected bear the traits of the people living in the city. The plants are well adapted to Beijing's cold, dry winter, hot and dry summer, alkaline soil and can be traced back to historical times. 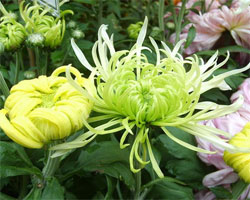 The China rose is regarded as “Queen of Flowers”, regenerates easily, grows rapidly and has a long blooming period which could last 5-6 months from May to October. The blossom of China rose is graceful and is widely seen on the sides of the roads, in communities and parks, especially in the Beijing Botanical Garden.

The Chrysanthemum endures the tough and cold environment and is regarded as the symbol of nobleness and perseverance. It has been highly regarded by many famous people through history. A large number of poets have written works, praising its charm and character. Beijing has more than 1000 varieties of Chrysanthemum which can be seen in the Beijing Botanical Garden, Beihai Park and Zhongshan Park. Some of the rare strains date back to Qing dynasty.

The Scholar Tree is a symbol of good fortune, joy and well-being while the Cypress symbolizes the courage and strength of the Chinese people, their simple and hard working nature and their defiance in the face of aggression. In addition, the Cypress tree is an evergreen tree and the symbol of longevity.