Beihai Park (North Sea Park) is located in the center of Beijing, with Jingshan Park to its east, the Palace Museum to its south and Shishahai to its north. It is one of the oldest and largest ancient imperial gardens in China.

Beihai Park was built up through five dynasties including Liao, Jin, Yuan, Ming and Qing. During the reignof Emperor Qianlong, a large-scale project was carried outover 30 yearswhich established the present scale and pattern of Beihai Park. 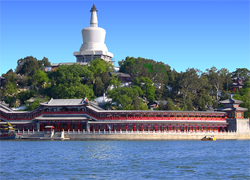 In ancient China, almost all of the imperial gardens were built with a‘one-pool-with-three-hills’ layout. This kind of layout was established according to a traditional Chinese legend.

It is said that once upon a time there were three magic mountains called “Penglai”, “Yingzhou” and “Fangzhang” situated in the east of Bohai Bay (Bohai Bay is named Taiye Pool in the legend). The gods on these mountains had a special kind of herbal medicine which could help the humansto gain immortality. To be able to live an eternal life, many emperors in the feudal age of China sought thesemagic mountains, but they failed. At that time, Emperor Qin ShiHuang, the first emperor in the Qin Dynasty, built a palace with a large pool and three artificial hills in it to imitate the circumstances described in the legend to satisfy his wish of being immortal.

From then on, almost every emperor in the succeeding dynasties would build a royal garden with a ‘one-pool-with-three-hills’ layout near his palace. Beihai Park was built with this traditional style: the water of Beihai is the Taiye Pool, the Qionghua Islet, the island of the Circular City and the Xishantai Island represent the three magic mountains.

Beihai Park occupies an area of 70 hectares, with over half of that area covered by water. The whole park can be divided into four parts: Qionghua Islet, the Circular City, the Eastern Shore Area and the Northern Shore Area. The Qionghua Islet, which is distributed with halls, rockeries and pavilions, stands at the center of the park. A white pagoda, which stands out on the top of the islet, is the symbol of the park. It is a Lamaist pagoda standing at 35.9 meters high and was built in 1651.Besides that, the Five-Dragon Pavilions and the Nine-Dragon Wall on the Northern Shore Area are also must-seeattractions for visitors.