Beijing Opera includes performances of stories from the history of China. It covers the tales of successive dynasties, important historical events, ministers, emperors, and beautiful women, from the ancient times of Yao, Shun, and Yu, to the dynasties of Qin, Han, Yuan, Ming, and Qing, over 3,000 years. Some of them refer to literature and classical novels that may not be a true account of history. Here are some famous stories.

The story is based in the Spring and Autumn Period in the State of Jin. The Zhao Family were nobility in the period, and all members of the family were killed because they were framed by Tu Angu (屠岸贾), a traitor. But the Orphan of Zhao survived and took revenge for his family when he grew up.

As one of China’s four famous folklore stories, the legend of the White Snake is a well-known story. It is a tortuous love story of a snake that changed into a beautiful girl named Bai Suzheng (the Qingyi role) and fell in love with a young man named Xu Xuan (the Xiaosheng role). 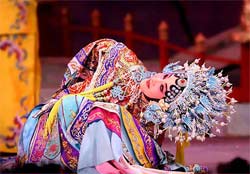 The story happened in the Tang Dynasty, around 745-755 AD. This is one of the masterpieces by Mei Lanfang. It is almost a one-person show. The story is quite simple. Mei made this play famous by his vivid performance reflecting the concubine's disappointment, the charm of her drunkenness, and her intentional showing off of her beauty. There are many movements difficult to perform, including drinking a cup of wine only using the performer's teeth, and placing the cup on the tray by bending over backwards.

The Ruse of the Empty City

This is a traditional play derived from the Chinese novel “The Romance of the Three Kingdoms”. The whole performance consists of three parts: "The Loss of Jieting Pass", "Use of the Empty City", and "The Execution of Ma Su". The second part is the core of the story and can also be performed alone. This is a popular play and has been performed by all famous opera masters.