The roles in Beijing Opera (Peking Opera) had seven categories during its early age, divided according to characters in the opera. They were Sheng, Dan, Jing, Mou, Chou, Wuhang, and Longtao. With the development of Beijing opera, it was divided into four main roles. They were Sheng, Dan, Jing, and Chou, based on the gender, age, evil or kind-hearted nature, handsomeness or uglinessy of the characters played.

Sheng is the male role in Peking Opera. This role has several subtypes according to the character’s age, personality and status, which has Laosheng (Senior Male Role), Hongsheng (Middle-age male), Xiaosheng (handsome young male role specializing in song and recitation), Wusheng (Acrobatic Male Role), and Wawasheng (a child role). 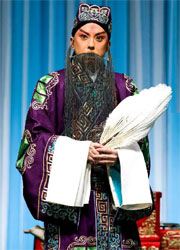 Laosheng actors are required to attain the dignity of bearing and gentle, polished manners of the middle-aged mandarin official or scholar. Laosheng roles included generals or high-ranking officers of the military, but they had a more cultivated disposition than those of real life.

Laosheng characters had a black or white beard, depending on the role’s age. They wore a black hat with tow fins on both sides, which varied in shape based on the role’s status. The costumes had a quieter and more uniform color than that of warriors who had a painted-face. The voice of a Laosheng character had to be gentle and firm. Officials and land owners were included in this category.

Hongsheng meant the character had a red face, a sub-category of Laosheng.

There are only two roles known as Hongsheng. One is Guan Gong and the other is Zhao Kuangyin. Guan Gong is one of the important roles in the Chinese classical novel “The Romance of the Three Kingdoms”. A Hongsheng’s voice is vigorous and high-pitched. 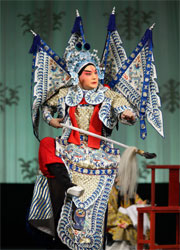 Xiaosheng is a handsome young male with no beard in Peking Opera roles. The roles sings in a high-pitched and shrill voice, with sudden breaks from his high-pitched voice to represent the voice changing period of adolescence.

Wusheng actors must be good at martial arts roles. The actor performs with swords and spears wielded deftly and quickly without the attacker actually touching his opponent. There are Changkao Wusheng and Duanda Wusheng. The features of Changkao Wusheng are wearing a helmet, heavy-bottomed boots and the use of long-handled weapons. The features of Duanda Wusheng are wearing short and simple clothes and the use of short-handled weapons. Although Wusheng roles requirea highly standard of acrobatics, they must also have a natural voice when singing.

Dan is the term for female roles in Peking Opera. The roles can be divided into six subtypes based on characters played. There is Zhengdan (Qingyi), Gui mendan, Wudan (acrobat), Laodan (old women), Huadan, and Daomadan (a stronger, more forceful character). Four examples of famous Dans are Mei Lanfang, Cheng Yanqiu, Shang Xiaoyun, and Xun Huisheng. 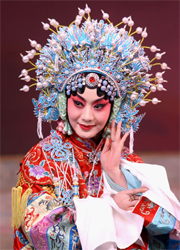 Qingyi is the main woman roles in traditional Chinese drama. Qingyi is the most important role in Peking Opera and plays dignified, serious, and decent characters, which are mostly wives or mothers. The roles dress in yellow clothes and feature a small range of motion, and singingwith a pure and high-pitched quality.

Mei Langfang played an important roles in shaping Peking Opera, and created a new role called Huashan, which combines the status of the Qingyi, with the sensuality of Huadan.

Guimendan is an unmarried and young girl role. Her immaturity is clearly shown in her reactions. Though naughty and slightly mischievous. T, the characteristics of the role are mostly are introverted and shy.

Daomadan is a female warrior role in Peking Opera. Like the male role of Wusheng, Daomadan actors train mainly for action, singing, and performing skillfully. The features of the role are the head-dress and military weapons. The most famous Daomadan role is Mu Guiying, who is a heroine in Chinese history, famed for her military prowess. 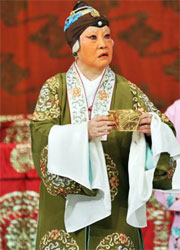 Huadan is the vivacious and unmarried woman role inPeking Opera. Compared to a Qingyi, a Huadan is not of such a high social class, and she will take the attention of the audience with her coy, coquettish, and quicker movements. Her costume is vivid in design and color, consisting of a jacket and trousers, and usually carrying a red handkerchief in her hand. The voice of Huadan has a gayer and stronger quality.

A Laodan plays an old and clever woman. Unlike other female roles, a Laodan wears no make-up, and her costume is more subdued in color and design. Her voice is natural and not high-pitched.

Wudan is a female acrobatic role, and requires a high standard of acrobatics. The costume of the role is simple and clothing is convenient for her movements. 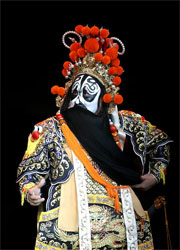 A Jing role is a prominent male character with striking looks and high social position. Both positive and negative characters can be played in this role. His robust, gruff, bass voice, and grotesquely painted face, together with his swaggering self-assertive manner, all combine to make him the most forceful personality in most scenes in which he appears. People can know the role’s character based on his face color: red for good, black for brave, upright or reckless, white for treacherous and cunning, yellow for brutal, blue for wild.

Three main types of Jing are Tongchui, good at singing and usually a loyal general; Jiazi, good at acting with less emphasis on singing; and Wujing, a martial arts and acrobatics role. 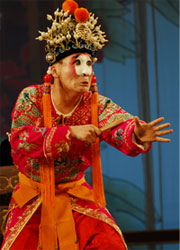 Chou is a comedy role in Peking Opera. It can be divided into two types: Wenchou, a civilian role such as a merchant or jailer; and Wuchou, a military role, skilled in acrobatics. The characteristic of this type of painted face role is a small patch of white chalk around the nose.

One of the famous roles in Peking opera is the Monkey King, who has a special position in the hearts of all who are interested in Chinese opera. With his quick, agile movements of his lithe body, and his blinking eyes, the Monkey King holds every minute of the audience’s attention.