Historically Beijing Opera's male actors played female roles. This can be traced back to the folk performing arts, which spread along the Yellow River and Yangtze River a thousand years ago. These were refined and developed in practice until they reached the present level of artistic interpretation.

Peking Opera's development has encompassed the meticulous division of roles, as well as a high level of specialization and detail.

In modern times, the most famous male Beijing Opera actors are normally born from an opera family with a deep cultural background. They learn form their parents when they are young, and participating in different roles, they develop their career through many years of hard work. Below is an introduction to the most important opera performers in China. 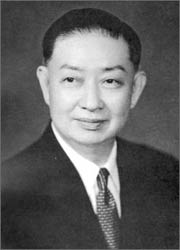 His grandfather Mei Qiaoling was a famous female roles actor in the late Qing Dynasty. His father, Mingrui, played Xiaosheng roles, and later changed to Dan roles. His mother, Changyu, was the eldest daughter of Yang Longshou, a famous Sheng role actor.

He started to learn opera when he was 8 years old, and had Zhu Xiaoxia, a well-known Xiaosheng actor, as his master.

Mei Lanfang first performed on stage when he 11 years old. He assiduously and continuously practiced his career, and learned and contributed to the heritage and traditional culture of opera. His singing, voice overs, dance, music and makeup, finally created his own unique style called “Mei Pai”, and a school of this name. He became the best of the four famous Dan actors. In his early years, his performances became popular in China and abroad, but he didn't use the stage name of Mei Lanfang until he was 16 years old. 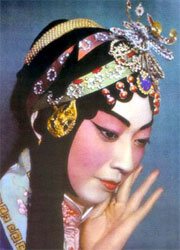 Mei Lanfang achieved great success on the stage, and attracted the attention by Westerners. He was invited many times to perform in Japan, the United States, and the Soviet Union. He got a doctorate in literature from the University of Southern California.

Mr Mei was a great patriot. He kept a long beard to demonstrate his position during the anti-Japanese war, and refused to put on any performances, making a living by selling paintings.

Mei Lanfang was good at playing Dan roles, i.e. female roles. According to the character's age, the character can be divided into a number of roles. Mei Lanfang played the woman role commonly known as "Qingyi”, a young or middle-aged female character in Chinese opera, often wearing a blue gown. The performance of Qingyi characters requires a demonstration of calm and elegance, and is dominated by singing. Generally speaking, the singing of Qingyi roles has the most beautiful melodies. 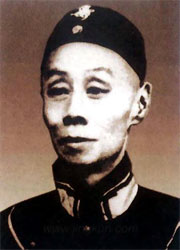 Tan Xinpei, the Beijing Opera master, was born in 1847 in the Qing Dynasty. He mainly played Laosheng roles (senior male roles). Laosheng actors are required to attain dignity of bearing and gentleness.

In his father's company in Beijing, when he was 10 years old, he began to learn opera. After many years’ hard work and practice, he got his chance to put on his first show in 1863.

Tan Xinpei created a large number of artistic images in his life. He carefully observed characters' identity and temperament, so that each play closely resembled the original.

Tan Xinpei not only paid attention to appearance, but also created unique features in singing and performing when shaping the character. He opened a new world of opera performce for Laosheng roles.

His way of performing became popular, and after more than half a century many Laosheng actors imitated him. The "Tanpai” style and school takes after his name. 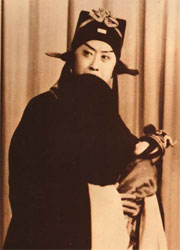 Ma Lianliang, was born in the late Qing Dynasty in Beijing, on February 28, 1901. He is well-known for playing Laosheng (senior male) roles.

He grew up in an opera actors family, so, deeply influenced by his family, he studied in Xiliancheng Opera School when he was 9 years old.

After 14 years of study he taught his first class, and finally developed a unique performing school, known as “Ma School”. His performances reached their peak period between the 1920s and the 1960s.

The singing style of Ma Lianliang is based on the style of Tan Xinpei, and combined with his own features, he broke out of the traditional way of singing, and developed his own style. It was quite different to other Laosheng actors.

When he was 27 years old, he started to record many albums, and published many of them. His singing style is fluent and smooth, firm and tender. His unique style of singing created a new era in Beijing opera, and became popular among the locals.

He performed frequently, his words sometimes sophisticated, sometimes vigorous, and sometimes humorous. In this way he expressed the different personalities of the characters and their emotions. He was good at handling words, singing with a strong artistic feel. 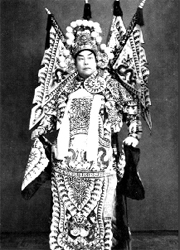 Zhou Xinfang was grew up in an artists’ family, and is counted as one of the greatest artists of Beijing opera. He played Laosheng roles and created a new style called ”Qi Pai”, the name taken from his stage name Qi Lin (the unicorn boy, or seven-year-old boy).

The majority of audiences loved this new style for his special husky singing voice. He first performed on the stage at 7 years old, and played a leading role when he was 13 years old. He performed with Mei Lanfang.

Zhou Xinfang was reputed for his consummate skills. Although he was not born with a good voice, he still became good at singing, his voice loud and broad, husky but not hoarse, with vigorous bass notes. He particularly paid attention to express the characters’ emotions. 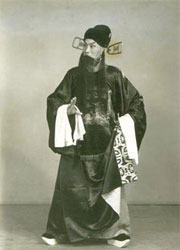 Yan Jupeng was a renowned Laosheng (senior male) actor, and the founder of the Yan School. He was a famous Beijing Opera amateur before he became a professional opera actor.

He studied from the master Tan Xinpei and developed his own singing style, which emphasized tones. His singing was mild and smooth. His popular plays are "Mourning Zhou Yu" and "Giving Xu Zhou". His son Yan Shaopeng, daughter-in-law Yan Xingpeng, learned from his style of performing. 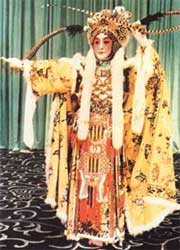 Shang Xiaoyun was a famous Beijing Opera artist and a great scholar. He was born in 1899, a native of Hebei province, formerly known as “Quande”. He was descended from the South King in the Qing Dynasty.

He put on his first performance in Beijing, and got praised for his Qingyi roles. He practiced hard on gestures, various dancing movements and singing skills in his early years. He enriched his performing style, while creaing and exploring the world of opera art. He finally developed his own school called "Shang Paian", important moment in Beijing opera history. 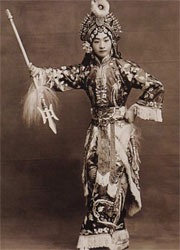 Cheng Yanqiu is one of the four famous Dan actors in China, and founder of the Cheng School. From 1925 to 1938, Chen was in the golden age of his career. He was a playwright, performer, and director, three in one, praised as a strong artist.

His works featured creativity, emphasis on singing phonology, four tones pronunciation, and the mild and indirect singing style of his unique voice. Cheng Yanqiu demonstrated a complete style, including expression of the eyes, gestures, footsteps, and finger movements, with a series of unique characteristics. His famous plays include “Unicorn-Trapping Purse". 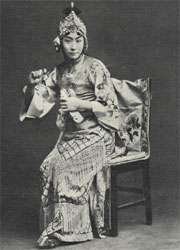 As one of the four famous female role players in China, Xun Huisheng got a reputation for his lively performances of Dan roles, He created his own school named ”Xun School”. His performing style focused on the great combination of life and art, with consistent facial expressions and gestures. He made a significant contribution to Beijing opera. 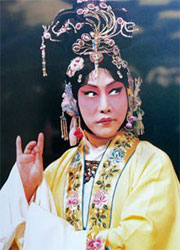 Zhang Junqiu is one of the famous Qingyi performers (a female role, and a type of Dan role), and the founder of Zhang School. He was born in 1920 in Beijing.

His singing style combines the features of the other four famous Qingyi performers: Mei Lanfang's sweetness, Cheng Yanqiu’s mild tone, Xun Huisheng’s smooth voice, and Shang Xiaoyun’s strong voice. His style of singing is mainly focused on two aspects: one is flexiblility of singing, and the other is breath control. His famous plays include "Mad After Losing Her Son" and "Liang Hongyu". Zhang was also dedicated to training new actors, and founded the "Rong Chun Opera School".