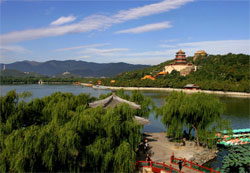 The Summer Palace, in Chinese Yihe Yuan, is now the largest and the most well-preserved imperial garden in China, counted as one of the four famous Chinese imperial gardens (the other three being Chengde Summer Palace, Suzhou Humble Administrator's Garden, and Suzhou Lingering Garden). It was listed as World Heritage by UNESCO in 1998.

Situated in Haidian District, 15km from downtown Beijing, the Summer Palace occupies an area of 290 hectares, with the lake taking up three quarters of its total area.

It is designed around Kunming Lake and Longevity Hill as the key features, modeled on West Lake in Hangzhou, and draws from design techniques and artistic conception of gardens from the south of China. This large landscaped and well-preserved garden is known as the Chinese imperial garden museum. 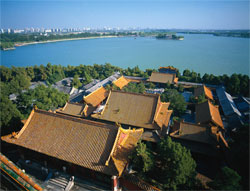 The Summer Palace was created in 1750, originally as the Emperor’s garden retreat in the Qing Dynasty. It was called Qingyi Garden at first.

Qingyi Garden was destroyed by British and French troops during the Second Opium War in the 1860s. In 1888 Empress Cixi spent a large amount of money to rebuild a similar garden, for luxury and pleasure in summer time, called the Summer Palace.

The Summer Palace has a great combination of imperial garden features, immersed in the surrounding natural landscape. It reflects the imperial garden principle of "built by man with resources from nature".

Apart from Longevity Hill and Kunming Lake, there are over a hundred scenic spots, more than 20 courtyards and 3,000 ancient structures, and 1,600 trees over a hundred years old.

The main viewing areas in the park are broadly divided into three sections. The first one is by the Hall of Benevolent Longevity, which was once the place for taking care of internal affairs, and diplomatic and political activities by Emperor Guangxu and Empress Cixi.

The second sightseeing area is between the Hall of Joy and the Hall of Jade Billows. The courtyards were used as the living area for Empress Cixi and Emperor Guangxu with his concubines. 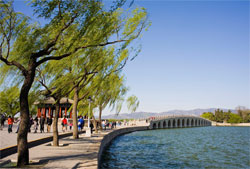 The last viewing area is around Long Gallery and Back Hill. This area was for the imperial family's daily luxury and recreation. On the central axis of the south slope of Longevity Hill are located three magnificent buildings: Tower of Buddhist Incense, the Hall of Dispelling Clouds, and the Hall of the Sea of Wisdom.

Tower of Buddhist Incense has three stories and eight sides. It is built on the slope of Longevity Hill and faces Kunming Lake, commanding a view of the whole park.

The magnificent Seventeen Arch Bridge, poised above the vastness of Kunming Lake, is at its best when viewed reflecting on the water.

On the shore of Kunming Lake are the famous sites of Marble Boat, Bronze Ox, and Spring Pavilion.

Suzhou Market Street, adjacent to Front Lake, has various stores in the style of the bustle trading streets hundreds of years ago.

The Summer Palace, along with the Forbidden City, and the Temple of Heaven, is a must-see imperial attraction of Beijing. 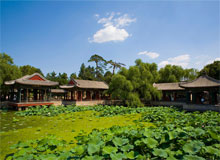 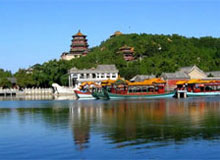 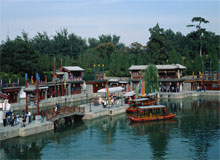