The Bell and Drum Towers 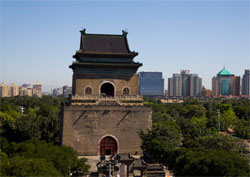 Beijing Bell and Drum towers date back to the Kublai Khan Period of the Yuan Dynasty. Throughout centuries of turbulent history, the Bell and Drum towers remains standing tall and proud at the northern end of the central axis of the Beijing Inner City to the north of Di' anmen Street, Dongcheng District, as a symbol of old Beijing.

The Bell and Drum Towers were initially used as musical instruments. It soon became a way for people to tell the time and a significant part in the everyday lives of residents, aiding people to work and sleep at expected times. Bell and drum towers took off during the Han Dynasty (206-220 BC) and featured in most Chinese cities.

The original Bell tower was destroyed by fire. The gray walled and green painted glazed roof tower that we see today was built in 1747. It is at a height of 108 ft which is the biggest and highest bell tower in China. The bell was struck 13 times at 19:00 to indicate and alert dwellers to the start of the evening hours. Throughout the night, at two hourly intervals inaugurating at 5:00. By this time, officials in attendance at the imperial audience were required to be kneeling in front of the Hall of Supreme Harmony of the Forbidden City and it said that punishment for being late was severe. 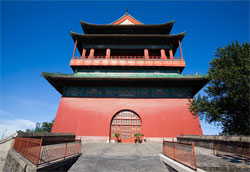 The iron bell clanged at 7:00 to proclaim the official start of the day and was later substituted by an even bigger bronze bell to be heard 20 kilometres away. The bronze bell has disappeared, but the original iron bell can be viewed on display behind the tower.

The Drum tower is a two storey wooden building with a height of 47 metres. It has survived from the Yongle period and used to contain one big drum and 24 small drums, unfortunately only one big drum remains. It is now beside two painted replicas that let us see what the original was thought to have been like. 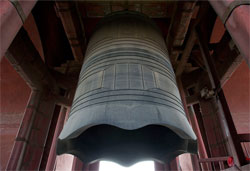 In January 1st 2002, the towers became a live again after years of abandonment and have rang out four times daily and for 15 minutes since.

Every New Year’s Eve, the drum is beaten with the bell 108 times and is believed to send out a blessing to the people. The area around the Bell and drum towers, the Houhai district becomes a live electrifying destination with maniacal sounds for the Chinese New Year celebrations and Beijing City fills with the colours of fireworks and the city parties for days and days.

Today you are able to climb the steps to be rewarded with an interesting view of the city, take part in the ringing of the bell and drum, learn about the lion dance and look at interesting folk – lore custom exhibitions.

A steep and exhausting 69 step climb up and you’ll be rewarded with an interesting view of the neighbourhood hutong tiled roofs. You can watch the life of the local residents which have kept up the old ways living in hutongs and courtyard life still goes on.

Around the towers, there are places for you to enjoy a traditional tea drinking in hutongs known and unknown. If you prefer, a real tea education is on hand at the tea shop at the bottom of the Bell tower, where you can taste every type of tea that China has on offer. Prices aren’t cheap, but a real cultural experience is on offer and is worth every cent.

The hutong area is fascinating and has lots of nooks and crannies to explore by foot or on a rickshaw and the most famous ones are Nanluoguxiang and Yandaxiejie (Skewed Tobacco Pouch Street).

Transport: Take line 2 and get off at Gulou Dajie Station, then take exit B

Admission: RMB15 for the Bell Tower and RMB 20 for the Drum Tower