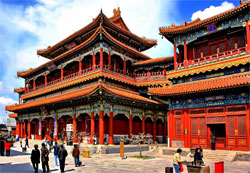 Lama Temple, also named Yonghe Lamasery, is Beijing's principal and largest Buddhist Temple. It was built in 1694, as part of the city wall for Emperor Yongzheng, prior to him rising to the throne in 1722. Yongzheng’s son - Emperor Qianlong, sent for 300 Tibetan monks and 200 Chinese students and housed them in the palace in 1744. From then on, the dwelling served as a temple and monastery, and considered one of the greatest centres of Buddhism outside of Tibet.

The temple has five main halls, each soaring over the one before, with clockwise changing prayer wheels, multicoloured tiles, lion statues and deep within the largest wooden Buddha in the world. Visitors are encouraged to purchase and burn joss sticks at the site to worship Buddha. By far one of the cities most impressive and fascinating temples, you could spend a whole day here enjoying the breath taking statues and artefacts.

The Hall of the Heavenly Kings

Entering from the south, you’ll recognise the Hall of the Heavenly Kings, by the pair of bronze lions that stand in front of the hall. In the centre of the hall stands a statue of Maitreya - the fifth Buddha of the present, who is said will come to Earth, when the ocean size starts to diminish, to make it easier for him to walk the World freely. In this depiction, he is smiling with the statues of the four Heavenly Kings on either side.

The Hall of Harmony and Peace 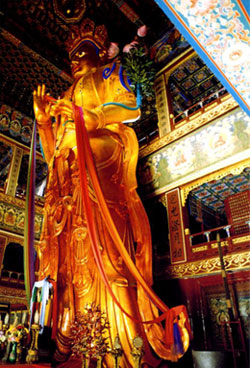 The next site and the main palace of the temple is the hall of Harmony and Peace. It houses three bronze statues of the Buddhas of the three ages - Sakyamuni on whose teaching Buddhism was founded, Kasyapa Matanga who introduced Buddhism to China in the 1st century and another of Maitreya.

The Hall of Everlasting Protection

The hall was the residence of Emperor Yongzheng when he was young. His coffin was placed here years later when he died. Devoted to medicine and prolonged existence, the hall features the Bhaisajya-guru - the medicine Buddha who heals the ill with his teachings.

Various rooms running off the courtyard contain the Wheel of Dharma that the Lamas use for religious observance, with a 20ft statue of Tsongkhapa, a famous teacher of Tibetan Buddhism, and statues of Yab-Yum, a divinity of both sexes whose sexual association symbolises cosmic unison.

The Pavilion of Ten Thousand Happinesses

No doubt what you’ve been waiting for is in the final hall - the Wanfuge (Pavilion of Ten Thousand Happinesses). It houses a Buddha statue of nearly four storeys high made from a piece of sandalwood. The sheer size of the statue will keep your neck craning for what seems like ages. 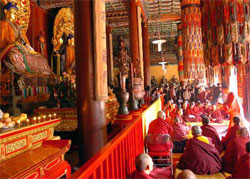 The Lama temple is like walking in paradise, with its many statues of Buddha and the smell of burning incense filling the air. You can buy incense at various points around the temple and are encouraged to burn it between halls. You’ll be rewarded by seeing the Lamas go about their daily lives and watch them worship.

The Lama Temple is a must see on anyone’s list of top things to see and do in Beijing. There is no excuse - you simply must go to the temple.

Transport: Take subway Line 2 and get off at Yonghegong station