Generally, autumn is associated with dullness because of falling of leaves, but if you visit Beijing you are bound to change your idea about autumn. Beijing at its best falls on autumn - clear sky, pleasant weather and eyeful colors. Autumn is the best time to see fall foliage and observe color change.

Beijing has thousands of hectares of foliage in its surrounding mountains which are covered with maple, Smoke trees, torch trees, gingko and more. Though the exact timing of the color change varies year to year, the peak time to see fall foliage in Beijing usually occurs from Mid October to Mid November. During that time, Beijing mountainous areas, the parks, even an unknown name street throughout Beijing are blanketed in a palette of yellows, oranges and reds.

Meanwhile, autumn is the best time to hike along the Great Wall as sections of the Great Wall are densely covered by verdant trees. In golden autumn, trekking on the ancient fortification along with eyeful nature’s colors and bright shades are truly amazing.

Out of Beijing, the other cities such as Guilin, Jiuzhaigou, Huangshan, Suzhou and Hangzhou in China has the most picturesque autumns. Get an eyeful of nature's painted canvas! Plan a fall foliage getaway to capture this beauty with us - some pre-arranged Beijing Fall Tours as well as the customized tours per your specific request.

Top Things to Do in Autumn Beijing

the best season to embark on Great Wall Hiking

enjoy the most stunning fall foliage throughout Beijing China 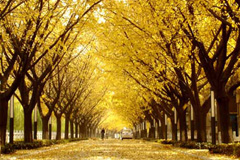 Beijing Diaoyutai Ginkgo Boulevard is the most famous place to observe the beautiful yellow color ginkgo. Ginkgo is an ancient tree which has a history of several hundred years or even a thousand year. In fall season ginkgo on both sides of the boulevard all turn into golden yellow. A lot of shutterbugs came here to take photos of the ginkgo trees. 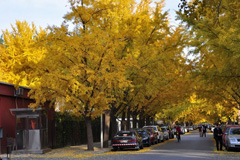 Here is the Embassy District, a quiet place though it is very close to the east Third Ring Road –the bustling area. It doesn’t have the green land like Diaoyutai, but it always has a soldier wearing olive green stands straight along the road. 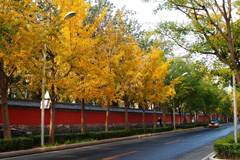 Beijing Temple of Earth Park is located at the northern side of Lama Temple. It enjoys beautiful sights at different seasons, especially autumn, because ginkgo leaves turned yellow in the Temple of Earth Park, making the tourist spot full of beauty. Some people think trees here are more ancient than those beside Diaoyutai. Strolling among the ginkgo trees is an enjoyment. 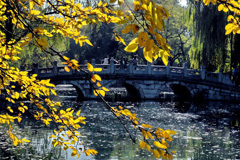 It might be a little bit different to see ginkgo trees in Peking University’s campus, because there are so many students around, drawing, reading and chatting. The campus with those ginkgo trees makes it a picturesque place. 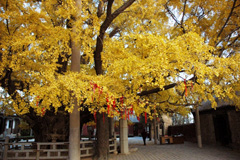 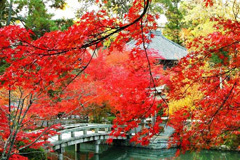 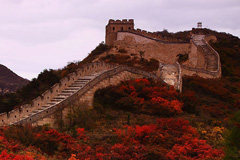 The Badaling Forest Park is next to the Badaling Great Wall. The famous Red Leaves Hill is located here. The altitude there is 500 meters higher than downtown Beijing, making the place cooler in autumn and the leaves are easier to turn red. Badaling Forest Park always is the first place to watch leaves turning reddish in early autumn. The red leaves scenic covers an area of 65 hectares. 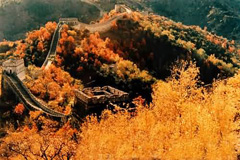