Beijing Zoo is located in the Xicheng District (2km west of Xizhimen subway station), next to the Beijing Exhibition Hall. The zoo occupies an area of 89 hectares, including 5.6 hectares of lakes and ponds. This ground contains a diverse collection of animals, a number of exhibition halls and some sites of historical interest. It is one of the oldest zoos and now the biggest zoo in China with the largest animal number of species.

The history of Beijing Zoo can date back to the Qing Dynasty. In 1906, during the reign of emperor Guangxu, the Imperial Ministry established an experimental farm, which held a small menagerie. It was called Wansheng Garden (the garden of ten thousand animals) at that time. The animals in the garden attracted great interest so the farm was opened to the public in 1908. 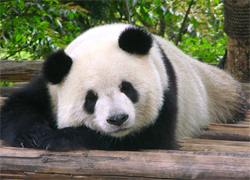 After the Qing Dynasty was overthrown in 1911, the zoo became a national botanical garden during the Republic of China. During the Second World War, many animals in the zoo died of starvation and some of them were poisoned by the Japanese Army under the pretext of protecting themselves against air raids. Only 13 monkeys and a blind emu were survived in the war.

After Beijing became the capital of People’s Republic of China in 1949, the city government rebuilt the zoo and gave its name Western Suburban Park. It was renamed Beijing Zoo in 1955.

With the support of the Chinese government, Beijing Zoo has developed rapidly in the end of 20th century. Now the zoo and its aquarium have over 450 species of landing animals and over 500 species of marine animals. In all, it is home to 14,500 animals. The Beijing Zoo is best known for its collection of rare animals endemic to China such as the giant pandas, the golden monkey, white-lipped deer and South China Tiger. The zoo also has a broad collection of animals such as jaguar, Asian and African elephant, black bear and polar bear. 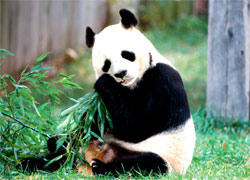 The Beijing Zoo site is comprised of 16 different exhibition areas and halls. One of the most popular halls is the Panda Hall. As everyone knows, the giant panda is native to China and regarded as one of the most precious animals and a national symbol. The Panda Hall was built in 1989 and covers an area of around 10,000 square meters. There are plenty of bamboo and bushes inside the hall, this make the Panda Hall similar to the wild habitat of the giant panda in the southwest China.

Except Panda Hall, many other halls also attract large number of visitors. Among them, the hall of giraffe and the hall of elephant are the most recommended. Beside these landing animal halls, the Beijing Ocean Hall is also worthy to take a visit. The hall was opened in 1999 and measures 35,000 square meters. The shape of the hall looks like a gigantic ocean trumpet shell.

Beijing Zoo is more than a paradise for animals. While at the zoo, visitors also have the chance to visit some the nearby historical relics such as Changguanlou, a two storied, baroque style building, the Song jiaoren Memorial Tower and Lemarck Hall.