When debarkation at Tianjin Port, are you looking for a picking up and a transfer, or even an excursion to Beijing before boarding on your flight home? There are several ways to get from Tianjin cruise terminal to Tianjin city or Beijing.

The Distance from Tianjin Cruise Terminal to:

There are several ways to transfer to Tinajin or Beijing. 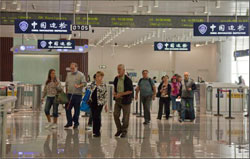 We offer a hassle-free transfer service from Tianjin Cruise Port to your Beijing hotel or return by private car/van and guide. Your guide and driver will wait outside the port to greet you with name board. A private transfer is worry-free travel because your guide and driver take care of everything. There are no worries about bargaining with a taxi driver or finding your way to the railway or bus station.

We offer coach transfer services between Tianjin Cruise Port and Beijing for passengers disembarking or embarking on Celebrity Cruises Cruise and Royal Cruises as scheduled.

Your guide  will meet you at the exit 3 and holding China Highlights logo and your name sign board. Start a 3-hour transfer to Beijing. The coach will stop at four hotels: Beijing International Hotel, Novotel Peace Hotel Beijing, Crowne Plaza Beijing (road side) and Prime Hotel. For guests who live in other hotels, the guide will help arrange a taxi at their own cost. 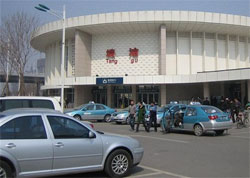 For more train information between Tanggu and Beijing, please check at Tanggu to Beijing Trains , Beijing to Tanggu Trains

Beijing – Tianjin Intercity Railway is an advanced bullet high-speed train with a max speed of 350 km per hour, with only 30 minutes to travel between Beijing South Railway Station and Tianjin Railway Station. There are three classes of seats are available on Beijing-Tianjin Intercity high-speed trains: RMB99 for deluxe seat, RMB69 for first class seat and RMB58 for second class seat. 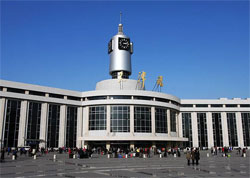 There are about 70 trains running daily between Tianjin and Beijing. Most of trains are high-speed trains, with minimum interval every 10 minutes, travelling between Tianjin Railway Station and Beijing South Railway Station. The regular trains usually depart from Beijing West Railway station or Beijing Railway station instead, with travelling time at 1.5 hours or more.

Tianjin Railway station is about 50km to Tianjin Cruise Port (Xingang Port). You should be able to take a public bus (No.680) at around 3-5 Yuan / 2 hours driving or a taxi at around 150 Yuan / 1 hour driving.

For more train information between Tianjin and Beijing, please check at Tianjin to Beijing Trains , Beijing to Tianjin Trains

Note: Taking a train between Tanggu, Tianjin and Beijing could be faster and cheaper, but it could be difficult to find your way at the railway station by yourself as there are little signs in English and the broadcasting is in Chinese only. Look around for people who could speak a little bit English for help to get the right way.

There are some taxis available parking by Tianjin International Cruise Home Port, but please be aware that most of these taxis are black taxi. They would ask for a higher price instead using a registered taxi meter measure. Make sure to take the registered taxis and ask for taxi receipt in order to avoid unnecessary disputes.

Here we list an estimated taxi fares from Tianjin Cruise Port (Xingang Port) for your reference: