Beijing's hutongs, lanes or alleys formed by lines of siheyuan (a compound with houses around a courtyard) where old Beijing residents live, witness the vicissitude of the city. 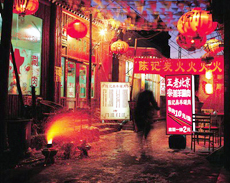 The word "hutong" originates from the word "hottog" which means "well" in Mongolian. Villagers dig out a well and inhabited there. Hutong means a lane or alley, in fact the passage formed by lines of siheyuan (a compound with houses around a courtyard) where old Beijing residents live.

Be care not to lost in it! It was recorded that in the Yuan a 36-meter-wide road was called a standard street, a 18-meter-wide one was a small street and a 9-meter-wide lane was named a hutong. In fact, Beijing's hutongs are inequable ranging from 40 centimeter to 10 meter in wide. The longest has more than 20 turns. Either in east-west or north-south, Beijing's hutongs varied as slant, half or " blind hutongs" cul-de-sacs. The gray-tiled houses and deep alleys crossing with each other in identical appearance like a maze, you will find it much fun to walk through but be care not to lost yourself. 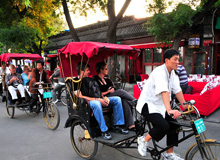