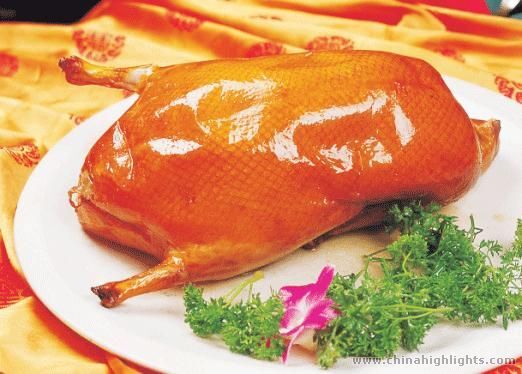 Beijing cuisine is famous for its hundreds of dishes with special flavors that are unmatched by any other cuisine. Among the most famous dishes or styles which found their way from the imperial court to public restaurants are Court Cuisine, Beijing Roast Duck, and Mongolian Hot Pot. You will visit stunning site spots of Beijing and taste the Beijing cuisine will offer you a special and delightful trip.

- Tiananmen Square: Tian'anmen Square is the largest city square in the centre of Beijing, named after the Tiananmen (literally, Gate of Heavenly Peace) which sits to its north, separating it from the Forbidden City. It has great cultural significance as it was the site of several key events in Chinese history. As the world's largest city square and enduring symbol of China's national pride, it is surrounded by many imposing buildings including the Heavenly Gate (entry to the Forbidden City), Museums, government buildings and Chairman Mao's Mausoleum.
- The Forbidden City: The Forbidden City was home to 24 emperors between 1368 and 1911.This "city within a city" is a World Heritage Site, and is the largest and the best preserved ancient imperial architecture complex in the world, with great square, halls and gates contrast with intricate halls, gardens, courtyards and quarters. The exhibitions, both permanent and temporary, are all important treasures of ancient China.
- National Centre for the Performing Arts: designed by French architect Paul Andreu, is an arts complex which people describe as a futuristic signature building. Located to the west of Tiananmen Square and with gorgeous design, it contains three large halls: a 2,416-seat opera house, a 2,017-seat concert hall and a 1,040-seat theater.
- Hutong Tour in Xicheng District: Hutong is a maze of historic alleyways with old single storey traditional courtyard houses, which are now fast disappearing. In this one hour tour, you can hop on a rickshaw to ride through the narrow alleys as well as visit a local family then walk on the Silver Ingot Bridge (Yinding Bridge) and find out about the different thresholds of the courtyards.
- Hepingmen Quanjude Roast Duck Restaurant: Beijing Roast Duck is renowned as the most delicious food of Beijing while Quanjude Restaurants enjoy a high reputation for its Beijing roast duck. Quanjude restaurants have developed their own technique and are famous for outstanding quality. Hepingmen Quanjude restaurant was established in 1979 and located beside Hepingmen Gate (Peace Gate).

- The Mutianyu Great Wall(with round way cable car): This less-crowded section of the Great Wall is a about 2.5 hours' drive from downtown Beijing. A cable car takes you to a good section (avoiding a very steep climb), where you can walk along the wall, through the watch towers and enjoy superb views as it snakes across the hills and mountains. You can return by cable car, walk down or walk along the wall for about an hour to descend by chairlift. Wear good walking shoes and protection from the weather.
- 798 Art District: Since 2002, the large number of artists' studios and contemporary art institutions began stationed here, and rented a scale of idle factories, and gradually developed into a gallery, the Arts Centre, artists'studios, design companies, fashion shops, bars and other catering space. The 798 Art District has promoted to the nation's largest and most influential international arts in recent years.
- Bai Jia Da Yuan Restaurant: The Baijiadayuan Restaurant lies within the famous " Yuejia Garden" in Suzhou Street, Haidian District, Beijing. It is famous for imperial court cuisine and the unique Baifu dishes. The restaurant is in the garden style of the Qing Dynasty. It has successively won the " National Special Grade Restaurant "honor.
- Xin Shuang Quan Restaurant: Xin Shuang Quan Restaurant is near Great Wall of Mutianyu section. This garden style restaurant serves farmhouse dishes, specializing in rainbow trout, sturgeon and salmon. The fabulous taste will leave you with great memories.

- Temple of Heaven: Built in 1420 during the Ming Dynasty, Temple of Heaven is a complex of Taoist buildings where emperors of Ming and Qing dynasties visited for annual ceremonies of pray for good harvests. Located in the south of Central Beijing, it covers an area of 273 hectares. Temple of Heaven was enrolled as a World Heritage Site by UNESCO in 1998.
- Hong Qiao Market(Pearl Market): This market is located in the south central area of Beijing, just to the east of the Temple of Heaven. It is filled mainly with cheap electronic goods like portable CD players, vcd players, camcorders, batteries, sunglasses, electronics, household phones. The items for sale are less brand conscious and tend to be from real "no-name" Chinese, Korean, Japanese and Thai companies.
- Mongolian Hot Pot at Donglaishun Restaurant: Mongolian Hot Pot at Donglaishun Restaurant is a must. The dishes are Islamic dishes , which are mainly cooked by instant-boiling, frying, quick-frying and roasting.
- Jing Mian Da Wang Restaurant(Chong Wen Men Branch): Jing Mian Da Wang specializes in its traditional decoration of old city with archaistic red lanterns & bridal sedan chair, it mainly caters wheaten food to diners from local and different regions, creating a cozy atmosphere of festival and household.