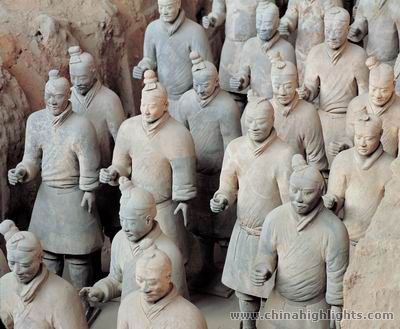 Desperate to see the Entombed Warrior but have little time? We can help. We will fly you to Xian for the day, show you the highlights and deliver you back to Beijing the same day.

Day 1Beijing to Xian by Flight,Xian to Beijing by Flight.

- The Terracotta Warriors and Horses: Discovered accidentally in 1974, this incredible army of over 7000 soldiers, archers, horses and chariots in full battle array has guarded Emperor Qin's tomb since 210BC. Each figure is unique, and the painstaking repair and excavation continues in 3 pits which are protected inside huge hangars. 1.5 hours from Xian, there is also an excellent museum and film about the history of the vaults. Photos (no flash) are allowed. Wear comfortable walking shoes.
- Ancient City Wall: The walls, ramparts, gates and watchtowers form one of the oldest and most complete city defenses still around. Built in the 13th century on the foundations of the original Tang Forbidden City, it s surrounding the city centre. You can walk or pay extra cost to rent a bike (CNY40 per person), rickshaw (CNY45 per person for 45 minutes) or an electric cart (CNY40 per person) around the full 14km circuit, with great views of the city on either side. If the weather is not good for biking on the city wall, we will substitute a visit to the Bell Tower. Your guide will be very glad to take you the Bell Tower after you have been to look at the city wall.
- A Wa Shan Zhai Restaurant(Qinling Branch): A Wa Shan Zhai Restaurant was established in 2004, mainly specializes in Hunan and Sichuan cuisine. It provides delicacy by using the material from Shanxi, obtaining a nationwide reputation from customers. It would be a nice choice to dine while traveling the nearby Terra cotta Warriors and Horses.